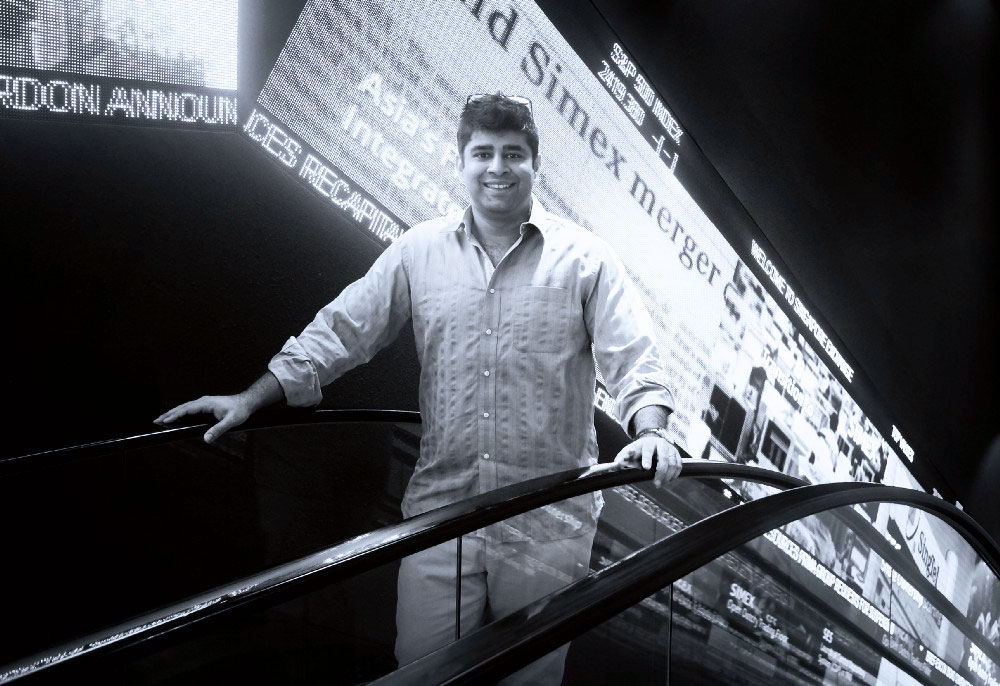 An interview with Singapore-based co-founder & CEO of Smartkarma

We met with Raghav Kapoor to talk about how he found his way into the world of finance and how his investment research start-up Smartkarma is helping reshape it. Here’s part of our conversation. “My life has been a series of events wherein things happened the way I hadn’t expect them to but they happened for the best.

I was born in India. At 15, I came to Singapore to attend boarding school. I then studied Computer Science and Geology at Cambridge on scholarship. I was supposed to return to Singapore for the summer vacations and work with the scholarship sponsors, but they actually told us to stay in the UK because of the SARS outbreak. Through serendipity, I ended up spending two summers in London working at banks.

I do not come from a family with a background in finance. My parents are academics and the most sophisticated investment they made is probably buying property. So, for me, working in an investment bank was completely new and fantastic.” “Back in 2007, after I joined the Equities Sales practice at Citigroup in Singapore, I made every effort to sell the stock of the Hong Kong Stock Exchange. Unfortunately, none of my clients showed interest. I remember going back to the office one day thinking that my career was doomed. And then a colleague said ‘Well, if you’re that convicted, why don’t you buy it?’

I sat down and then it hit me. If I bought one lot, which was a thousand shares, I’d need about US$ 10,000 — more than my salary. I didn’t have that much money in the bank. So, somebody suggested buying call options or listed warrants on it. That way, I could have more leverage and less capital outlay. In the end, I placed an order for US$ 5,000 and it got executed. But being a bank employee, I needed to have money in the bank straight away, which again I did not have. I ended up borrowing money from my boss.

That was the first investment I did. “If you invest sensibly, it’s a life skill.”

Soon the whole trading floor knew about what I did and was marking my position in the market on a daily basis. They loved the fact that I was living and breathing markets, enjoying every moment of it. Luckily for me and everyone involved, Hong Kong Stock Exchange went up, so I made US$80,000 out of US$5,000. But what’s more important, it taught me that if you invest sensibly, it’s a life skill.

I always said technology is my first love, investing is my second love when it comes to work.

Those years at Citigroup were formative years for me. I had the resources of a large bank to learn. But it was also a time when I felt quite disillusioned. I walked in thinking I would deal with the most sophisticated investors but what I saw on the ground wasn’t all that impressive, at least from a technology standpoint. I thought that I would be engulfed in a world of great technology systems and processes but actually, it was very basic. And this is not me taking a moral high ground or being arrogant, but I generally felt that money was too easy and too good in large banks.

Yet what Citi gave me more than anything else was a lifelong obsession with investing. I always said technology is my first love, investing is my second love when it comes to work.”

“By 2009, the world was different. Banks were on a decline and I was starting to miss the energy that was in that place two years back. When the opportunity arose, I went on to launch a boutique brokerage house called Aviate Global, which was later acquired by Religare Capital Markets, a large Indian financial services company.

Do I want to sit here and see the world change around me? Or do I want to lead change?

Following the exit, my partners and I stayed on at Religare. During those four years with them, we saw a big change in capital markets globally. Two big forces started to reshape everything. One was technology. The second was a big upswing in regulation.

As we were looking at all of this happening, I asked myself: ‘Do I want to sit here and see the world change around me? Or do I want to lead change?’

My co-founder Jon and I saw the same thing. We believed that capital markets would be replaced by digital marketplaces and there would be one marketplace leader for each of the different services within capital markets. We wanted to tackle research so that was the premise behind Smartkarma.

Our main tagline has always been ‘Research Reinvented.’ We see research as a core building block of capital markets. It’s the flow of information, ideas, and insights that ultimately leads to any kind of investment decision. But when we started, the market for research basically did not exist. People would acquire research by just trading with the bank, research services being bundled into one trading commission.

One of our early views was that regulators will move to break that, which has come true. We also felt that as people separate pricing for these services there will be a question of economics. And again, we felt that a new business model was needed. So the first year at Smartkarma was a year of just crystallizing the idea and making sure that we have something, which is long-lasting and disruptive in nature.”

All the research you’ll ever need

“To my mom, I would tell Smartkarma is what makes better investments. To someone more sophisticated, I would say we are like Spotify for research. We built Smartkarma as a collaborative marketplace for research with a simple value proposition.

The idea is you pay a single subscription and get unlimited access to research inputs from a lot of top providers. But unlike Spotify, research providers and end clients can engage with each other.

We built Smartkarma as a collaborative marketplace for research with a simple value proposition.

To our research providers, we offer a holistic solution for their business — all the way from how they produce, distribute and get discovered, to how they market and get paid. To our clients, we sell a very simplified business model in a world where payments for research are getting unbundled.

As the business is growing, so are the network effects.” Building for the long haul

“Now, we are about to enter the state that I call Mach 2. Mach 1 is when you break the sound barrier. Mach 2 is when you go twice the speed of the sound.

For us, Mach 2 means thinking of everything we want to do and doing ten times more.

We will soon expand the scope of our offering and the market segments that we cater for. This means that we are about to branch out of Asia, with two big markets — Europe and US — getting built up and we are going beyond institutional asset managers, adding corporates and other market segments as our clients.

This is not a two, three years build and sell.

Within the last six months, we have opened offices in Hong Kong and London and already have people on the ground in Frankfurt. This is not a two, three years build and sell. This is a new way for the whole industry to operate, so we are building this business with that thought in mind.”

Special thanks to Raj for sharing his story with us. Follow him at @ragkap and learn more about his work at smartkarma.com. For the latest stories, you can follow Wavemaker Partners on Twitter, Facebook or LinkedIn.